Today I thought I would remove the DiaCompe brake levers from the handlebars the Cresta GT came with, so I could clean them. 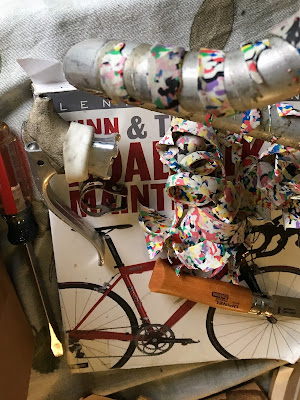 What a PIA, and a mess to boot.  The bars were double wrapped and very sticky between layers which meant the old bar tape came off in tiny bits not one big strip.  It took far longer than anticipated just to free one bleeping brake lever. 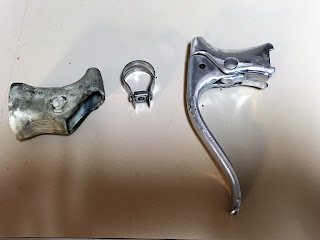 The hood, though filthy, was in pretty good shape and supple, 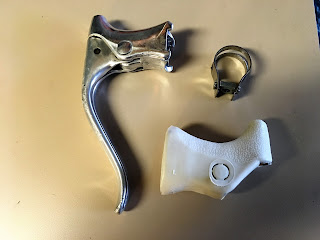 I started out with warm water and hand soap, just using my fingers to work the soap into the hood,  I followed up with more hand spap and a tooth brush for the stubborn stuff and finished off with a spritz of WD-40 and one more go with the tooth brush. 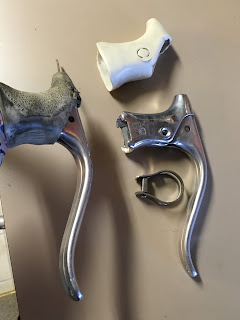 Pretty big difference huh?  As I was cleaning the hood I was thinking two things.  First man these hoods are small as in how comfortable will they be when my hands are on the hoods?  And second that white hoods like white bar tape look great... for about 5 seconds, with any riding they become dirty and dingy and show it more readily than other colors.  It's possible there is an Amazon cart filled with; bars, stem and brake levers as a result of the brake lever exercise this morning. The cart hasn't approached checkout yet but its ready if needed and because of some judicious choices is just under a $100 before tax rather than close to $150. (EDIT: itchy trigger finger- Ordered)

In checking my craigslist ads for the Mirage and Rapide, I was looking at the bike listings (market research you know -yeah right) and came across an 84 Schwinn Le Tour (catalog shot above).  I was drawn in by the top mounted Suntour down tube shifters.  I have wanted to work on a bike with these since 2013, when I wrote the post: the secret life of friction shifters, my second most popular post ever according to Blogger.  The bike was also my size, fairly stock judging by the one picture  and reasonably priced since the seller is moving, and it already had one price drop.  My mind raced with how it would be cool to play with those shifters and how the 4130 chromoly frame would be a great commuter platform, and how it would fit the NIB 7 speed wide range FW I have in the parts bin and.....  Then I sobered up and got real, I have two bikes still unsold on CL, with a 3rd about to be finished and put up for sale.  And I have two other bikes in need of rehab and my daily rider.  That makes six bikes still in the apartment and two full overhauls to come, I DON"T NEED MORE!!  And for what I would pay for the Le Tour I can check out the cart on Amazon for the Cresta GT (which in fact I just did).  Down boy.  I also know that many bikes, from many makers,  were made in the mid 80s with these shifters and I can find one when I am ready, maybe even on a Schwinn with Tenax tubing.  And if I need a commuter platform I have lots of choices in house.  I know this will be news to you all, but I might have a bike acquisition addiction. 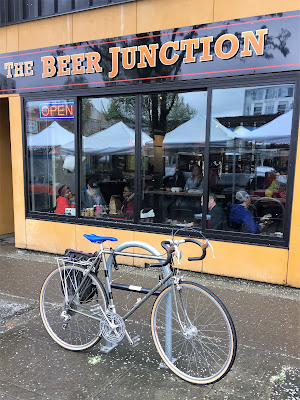 Craigslist crisis averted it was off to the beer Junction.  I choose the Moto_GT in part because I don't mind if its cheap, place holder, saddle gets rained on.  It's not that the Brooks can't take rain, they make them in England after all, but I try not to go out of my way to get it wet.  I also like that Moto_GT reminds me it needs the full restoration treatment with every ride, I noticed the front brake is mushy so it may need to go to dry dock. 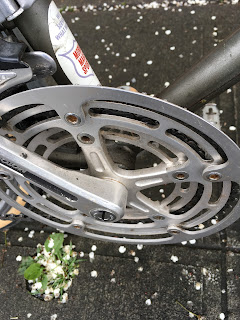 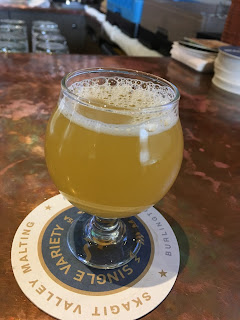 I started off with the Holy Trinity IPA from Skookum Brewery in Arlington WA.  Jaysus, Mary and Joseph -that's good boyo. 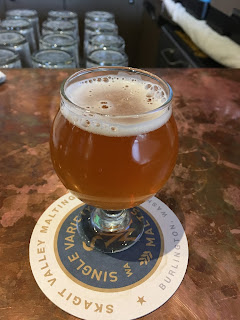 Followed by the Notorious Imperial IPA from Boneyard in Bend, OR. 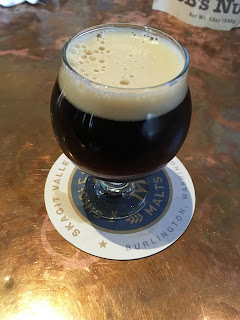 And I finished up with an Irish Death Stout from Iron Horse in Ellensburg, WA. 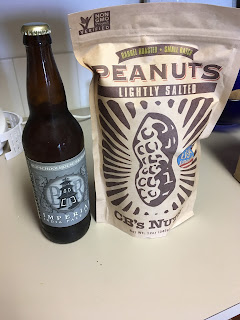 After tasting beer and watching baseball, they have MLB network going on Sunday's, I couldn't leave the Beer Junction without some beer and Peanuts.  Ride.Smile. Don't hoard bikes.Repeat.
Posted by RoadieRyan at 4:58 PM